1. The natural-physical space and the basic character of social organization

The basic aim of this work was to try demonstrate that the structure and system of values of a society that exists in a place (consciousness) is influenced by the properties of the physical environment (being), and on the other hand, that the society that is therefore locus-specific, tends to influence the environment in accordance with the inherent patterns of environment, and re-create those patterns in the built environment. Thus, the society through the alteration of the natural environment expresses its own organizational patterns (shaped by the natural environment) and creates the restraints of development on both the level of ideas and matter. Since the public buildings are the material expressions of communities existing on the level of ideas (city, country, nation...), in them the peculiarities of related history, culture, set of value, social organization, in other words the locus-specific spatial-social differences (relational assets?) are taking material forms. The spatial and structural relations of these symbolic buildings therefore are describing and re-creating the characteristic organizational patterns of the space in a lower dimension.

Furthermore, this work is trying to present a holistic point of view, that could possibly contribute to the simplification of the scientific research in social planning allowing the reduction of the quantities of analytical observation needed, analyzing the phenomena through a highly-sophisticated system of symbols, in which system all things, whether tangible or intangible, can be interrelated and evaluated.

The most characteristic features of the physical space: 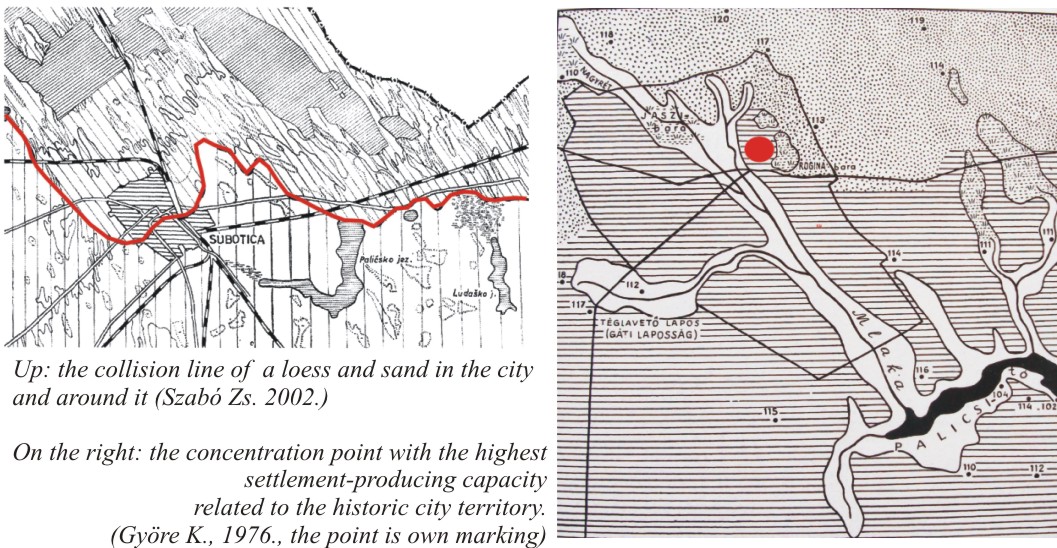 - The northwest-southeast flow direction of energies as shown in general watercourses and dominant direction of winds,

- The line where the different relief-energies of sand and chernozem meet, curve in a bay-like accumulation form in an orthogonal direction to the northwestsoutheast energy flow,

- The initial forming point of the city is the highest point in the accumulative area formed by the collision line of relief-energies. This „castle-mound” is surrounded by negative surface forms enhancing the capacity of the initial point,

- The division of the space of the city on the northwest-southeast axis by the Nagyrét-Mlaka valley-system and orthogonal division by the Gat creek and a system of swamps extending on a northeast-southwest axis.

The temporal-social and symbolic impulses that triggered the development of the city:
- the direction of the social movements coincided with the northwest-southeast spatial energy flow direction during the 18th century liberation wars against the Ottoman empire.

- the Tisza-Maros military frontier-territory was established as the result of these wars, the essential information quality of this military territorial organization (authoritarian organization) carries the same value as the northwestern direction from which the energy comes, and thus the territorial unit made the energy accumulation possible. The direct governance of the territory by the Emperor (highest authority) in Vienna (northwest) represents the activisation of the accumulation capacity at the symbolic level. 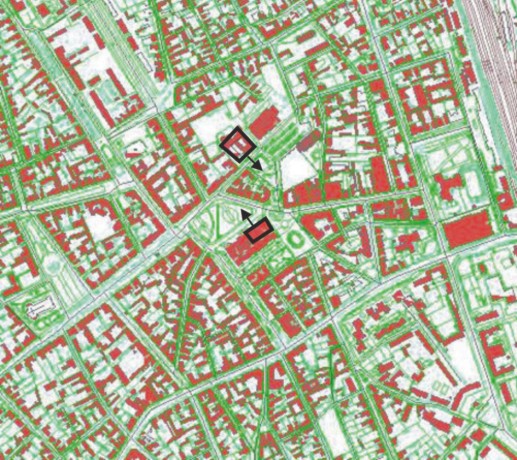 Formation of the secondary accumulation point: the dissociation of the material and spiritual legitimation.The position of the southeast-facing Franciscan church and monastery, and the pozition of the first City Hall on the contemporary plan of the city. (Own marking on the GIS layer)
- The secondary accumulation point was conceived within the accumulation territory. The first City Hall was built outside the primary center, the „castle mound”, thus separating the material and spiritual centers. The material one – the City Hall, representing the point of secular power – was built facing northwest, constituting a stopping point for energy flaw, which made the concentration of matter – houses and inhabitants – possible. The primary
concentration area is in the northwest segment of the city, showing the City Hall as an „energy dam”, precipitating matter upstream.

The basic characteristics determining the space and the society of the city from Feng Shui angle:

- The shape of the sand-chernozem collision line at the territory of the city can be considered as a matter-accumulating feature, consequently related to the qualities of earth, while formation of the primary accumulation point depicts a fortification, the essence of which is exclusion which is correspondent to the qualities of metal.

- The spatial and social currents enabling the formation of the city are coming from northwest, thus carrying the quality and values of metal. The correspondent notions of metal are the father, the patriarchal order, the authority, the law, the concentrating, inward-turning movement, the borders, exclusion.

- The accumulation of energy results in accumulation of matter therefore can be related to the qualities of earth. Other things corresponding to this concept include land, fertile soil, nourishment, the precipitation-type downward movement, the agriculture, matter, walls, real estate. The precipitation gradually builds pressure, which is an inward-movement, increasing density, which can be related to metal - The secondary concentration point – the City Hall – activated this accumulation capacity described by earth and metal qualities, resulting in intensive accumulation and the forming of the city.

- The isolation and decreased accessibility of the primary concentration point depicts the strict division between the material and spiritual, earthly and heavenly aspects of existence, which favors the material aspect, pushing the spiritual aspect and movement like its inherent quality to background. The static-dynamic balance is thereby permanently shifted towards the statical forms, which excludes the dynamic aspects – change, movement, flow, transformation – from the physical and mental space. Therefore the increase in amount of the qualities defining the space-society segment (earth and metal) can not lead to the  transformation, to change of quality. The basic patterns describing the character of place and society are permanently governed by these two qualities, outlining static, materialistic and conservative local social organization schemata.